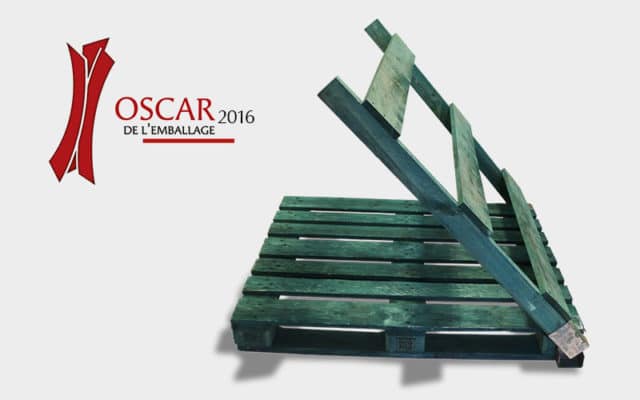 The subsidiary of the PGS Group (Palettes Gestion Services), a leader in the wood pallet industry, was awarded on Monday evening the Package Container Oscar for 2016 in the “industrial container” category, for its new ECO PGS back flap pallet. Environmentally friendly, foldable, easy to ship and handle, the latter is paired with a European collection service to make reuse easier.

Every year, the Packaging/Shipping Container Oscars – organized by Emballages Magazine – awards industrials and professionals in the industry who innovate in the areas of consumption, materials, or the environment. This year, in the « industrial packaging/container» category, the subsidiary of the leader PGS, PGS Reverse, was awarded on Monday evening the prize for the best innovation for its new version of the ECOPGS foldable back flap pallet, on display until Thursday evening at the ALL4PACK show, at Paris Nord Villepinte, at the company’s stand F043 (hall 7). Less known, due to its format, the back flap pallet is a key component used in stocking for home improvement/hardware retail outlets to handle, for example, doors and windows. The innovation made by the subsidiary of the PGS Group is based on the manufacturing of a pallet with a back that can be folded and adjusted depending on its use. To achieve this, PGS Reverse studied all of the limitations of the back flap pallets on the market in order to make improvements and come out with a new version of the pallet. Their findings clearly showed that the pallets with back flaps currently on the market lacked flexibility, were not big enough or standardized, were difficult to stock, hard to handle and had a limited service life due to a lack of collection and relocation services. 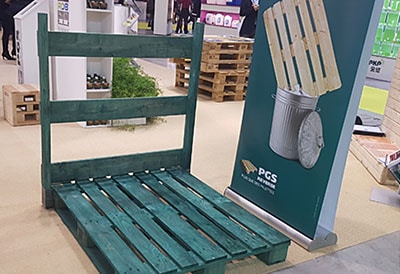 Based on these findings, PGS Reverse subsequently developed a prototype, then filed a patent for a pallet with a back flap that met users’ needs. How? By creating a new generation pallet that is foldable. Its clever design enables to multiple by three fold load rates, while significantly reducing shipping flows and greenhouse gas emissions. Another substantial improvement: the pallets are stackable; they may be stocked in piles or racks, subsequently dividing by three the amount of floor space they use and also decreasing the risks of MSD potentially caused by handling. The ECO PGS pallet with its foldable back is marketed in multiple rotations to multiple customers and is sold with PGS Reverse relocation services. Due to the PGS Group’s extensive nationwide network, they can be reused and redelivered to the closest points of collections. « We are very happy to have been awarded this prize that rewards the work performed by every member of PGS Group team. We are particularly proud because this innovation also goes hand-in-hand with our strategy to promote the group’s circular economy concept for the French wood package industry, an area where we play a big role within the Group. » stated Eric DEMÉ, PGS Reverse General Manager.

We use cookies to guarantee the best experience on our site. If you continue to use the site, we will consider that you agree to the use of cookies.OkNonEn savoir plus